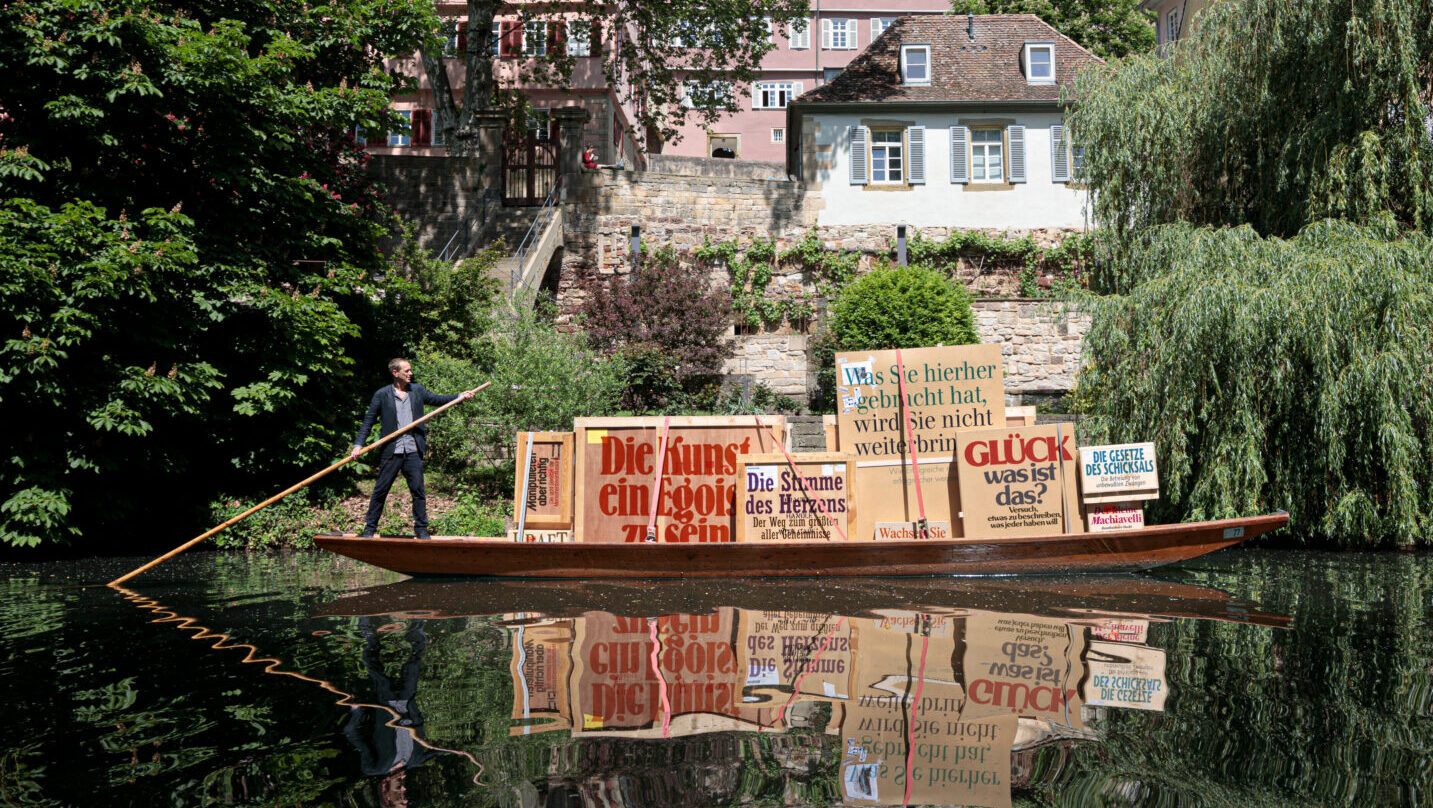 I WAS TOLD TO GO WITH THE FLOW

Christian Jankowski is one of the most influential action and concept artists of his generation. To this very day, he has been repeatedly surprising the international art world, particularly with his subversive performances and actions. Jankowski was born in Göttingen in 1968. He developed his distinctive artistic approach, which involves a systematic socially-relevant praxis, in response to the context art of the 1990s, among other things.

Having studied in Hamburg in the early 1990s, his work was marked both by Franz Erhard Walther’s participatory activation of artworks and by the “image refuser” Stanley Brouwn, who, like Franz Erhard Walther, expanded the concept of art to include the viewers. Jankowski has also been influenced by Martin Kippenberger and Werner Büttner, who undertook to deconstruct socio-political topics in both images and words, and in a subversively ironic way.

Even as a student, Jankowski caused a furore with actions such as Die Jagd (The Hunt 1992), during which he slayed foodstuff in a supermarket using an archaic bow and arrow. His hunting activities between the supermarket shelves made the 23-year-old famous overnight, as it were. He frequently appeared as the protagonist in his early performances and videos, the aim being to provoke rational consciousness and to enchant, in the truest sense of the term, audiences again with works such as Mein Leben als Taube (My Life as a Dove, 1996).

Around the turn of the century, Jankowski expanded his art to include social systems such as that of religion, politics and the entertainment industry. Here he himself increasingly remained in the background, as the image designer. Instead he availed himself of existing media formats and their production processes so as to clearly illustrate routine behaviour in the respective profession. He embroiled TV priests, politicians or fortune-tellers in collaborations so that they voluntarily became team mates, sometimes even unwittingly. This appropriation strategy culminated in 2011 in Casting Jesus (2011), for which he got representatives of the Vatican to choose the best Jesus using the format of the Casting Show.

The large-scale monographic show at the Kunsthalle Tübingen entitled I WAS TOLD TO GO WITH THE FLOW presents a survey of Jankowski’s extensive oeuvre, encompassing not only films but also photographs, sculptures and paintings. Here the metaphor of the travelling artist leads to the heart of Christian Jankowski’s artistic praxis. Not only is travel a constant components of his life, it has also become encoded in his DNA as an artist. Adopting the distant stance of a researcher, Jankowski also engages with his own culture. The exhibition invites viewers to see our life world, history, the media and art from a whole new perspective.

To accompany the survey show at the Kunsthalle Tübingen an extensive catalogue will be published with essays by Karen van den Berg and Oobah Butler and with illustrations of all the artist’s works from between 2014 to 2022.

Accompanying the survey show at Kunsthalle Tübingen is the comprehensive catalog TRAVELING ARTIST, with contributions by Karen van den Berg and Oobah Butler, which includes all of the artist’s works from 2014 to 2022.